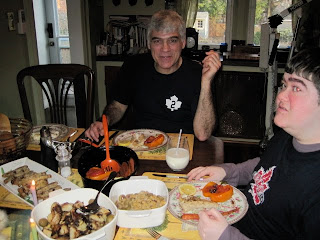 I decided that I wanted to try and cook Easter Dinner for my family. I don't have much experience in the kitchen, so I had some help. I used recipes from Laura Calder's French Food At Home on Food Network Canada. Her show airs right after Chef at Home, so I usually watch both!

I chose a theme I wanted to work with and that was olives! All the recipes I chose had olives in them (green or kalamata).

Here's the menu:
First was the Bacon and Olive Aperitif Cake. It was delicious! It was a sort of bread made with bacon, kalamata olives, gruyere cheese and rosemary. There was a lot of butter in it and it made it very heavy, so next time I think I will cut down on the amount. 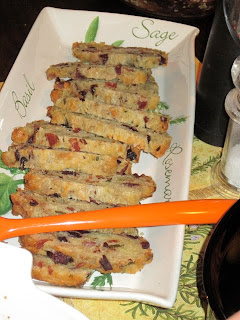 Next were the Stuffed Peppers. Orange peppers stuffed with garlic, kalamata olives, fresh basil and tomatoes and then baked in the oven for about half an hour. These were sooo good! 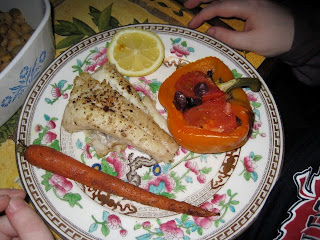 In the above photo you are also seeing the Halibut with Brown Butter Sauce and the Cumin Carrots. This recipe also includes the Olive Chickpeas. 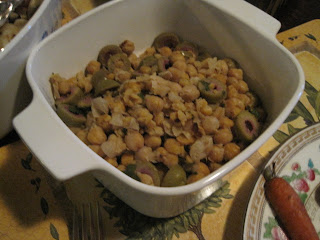 I also made some Olive Potatoes. These skinned red waxy potatoes were fried in olive oil along with garlic and onions and when they were cooked I added in green olives, kalamata olives and pine nuts. 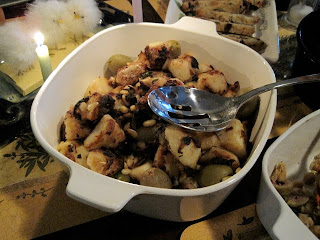 I also made a Greek Salad, but I didn't get a photo of it. I think everyone knows what a greek salad looks like anyway. It was a really good choice to go along with everything. All the vegetables and the cake were heavy, so the nice light salad was a great side. 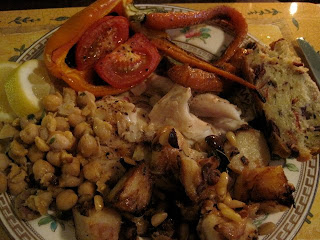 For dessert I was going to make a Hazelnut Roll but I had a lot of trouble with it. The recipe was harder than I thought it would be. I wasted a lot of eggs trying to get it to work. In the end the batter just looked like scrambled eggs with hazelnuts in it. Also, in her recipe it calls for "heavy cream" but it should really be listed as "whipping cream" because it needs to whip.

Even though my dessert didn't turn out, I'd say the meal was overall a success!! I'm so proud of myself. There is only so much Food Network watching and cookbook reading one can do, and you only learn by doing it. I did make mistakes but I learned a lot and would definitely make most of these dishes again. I will even try again to make the hazelnut roll.