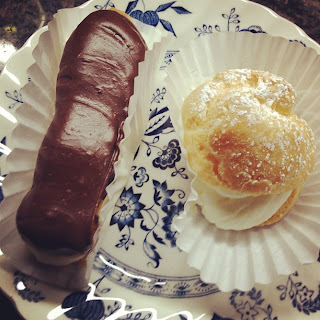 According to Wikipedia, an éclair is an oblong pastry made with choux paste dough filled with a cream and topped with icing. The dough, which is the same as that used for profiterole, is typically piped into an oblong shape with a pastry bag and baked until it is crisp and hollow inside. Once cool, the pastry is then filled with a vanilla, coffee or chocolate flavoured custard (crème pâtissière), or with whipped cream; and then iced with fondant icing. The icing is sometimes caramel, in which case the dessert may be called a "bâton de Jacob".
The éclair originated during the nineteenth century in France where it was called "pain à la duchesse" or "petite duchesse" until 1850. It is a popular type of cake served all over the world. The word is first attested both in English and in French in the 1860s. The first known English-language recipe for éclairs appears in the Boston Cooking School Cook Book by Mrs. D.A. Lincoln, published in 1884.

The dough for the éclairs and profiteroles is the same.
This is a modified version of the recipe we used in class in Baking Arts and George Brown College.

Directions
Here are some Video Tutorials for piping éclairs and profiteroles.

Chocolate Eclairs & Profiteroles
Directions
*To top the éclairs we used a pourable fondant and added chocolate fudge. Here is a recipe if you want to make your own pourable fondant.