Hi folks! After a brief hiatus, while I went on vacation, I'm now back and ready to bring you some more posts to read and salivate over!

One of my photos, that I sent to Gastropost, was published in the National Post on Saturday, August 3! 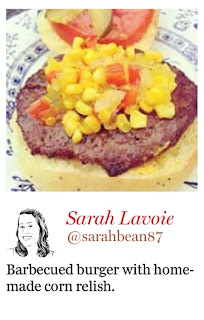 Mission #62: Corn Goes Pop
"Who’s that husky fellow awaiting us at the produce section and farmer’s market? Why, it’s our old friend, fresh local corn, back and tasty as ever. Your mission this week is to take part in an Ontario midsummer tradition: Eat some corn, whether it’s a simple cob or a dish that incorporates its colourful kernels".

Here is the PDF of Saturday, August 3 Gastropost Spread. You'll find my photo in a smaller section called "Taking Food Further"  because I made the food myself instead of taking a photo of something eaten in a restaurant. If the submissions are creations made at home an additional hashtag is included: #further.
The mission was to eat some corn and I made corn relish to top a BBQ-ed burger.

I made the corn relish in my canning class at George Brown a few weeks ago and finally got to garnish something with it. And since it fell in line with the Gastropost mission I took a photo of my meal and posted it on Instagram.

This is a modified version of the recipe we used in class. 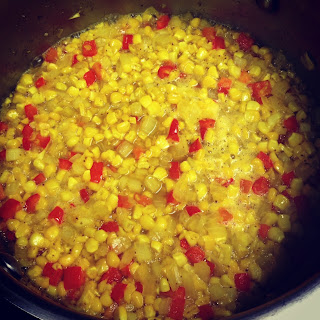 Note: You could do a version of this with roasted corn. 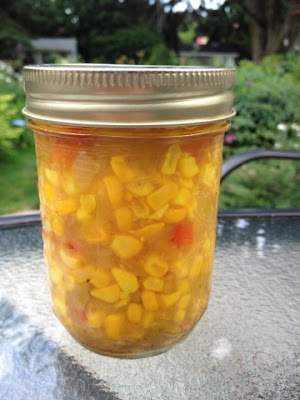 Posted by Elizabean at 8:30 PM